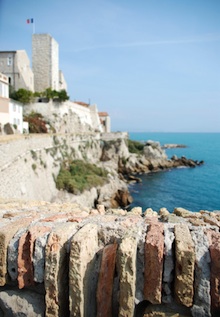 A little detour in southern France while Finland is slowly waking up to spring... The weather forecast promises rain for today but it is a forecast à la Antibes: I can see the wrong kind of clouds only in the distance. Despite that, I keep the goretex jacket in my backpack. You never know.

However nice the old town of Antibes is, I long for some nature instead of pretty streets lined with shops. Just have to be careful of the cars on the very narrow street going south. The pavement is so narrow that you can hardly call it one. 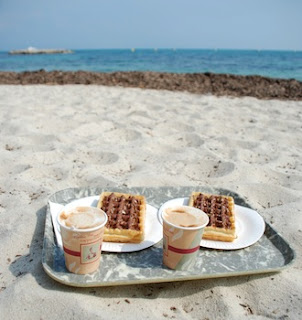 A group of petanque players has gathered in a park by the sea and the few sunbathers on the beach seem sleepy. More sun, anyone? We stop for a snack at Ponteil beach. The large waffles look better than they taste but with Nutella on top they become very edible. 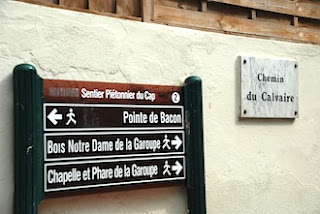 The harbour of Salis seems to be for small boats, used by ordinary people and not millionaires. I look for the Chemin du Calvaire which will lead us to the top of Notre-Dame hill. The wide, paved and for the most part fenced footpath turns to the right and we start the easy climb towards Garoupe lighthouse (phare) and chapel. The houses on the left of the path are well hidden behind the fence but luckily there is a forest on the right. 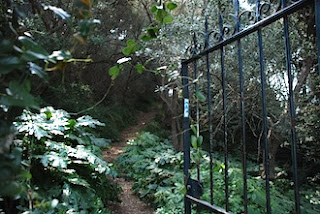 Should we choose the first possible entrance to the right to explore the forest? It looks inviting and surprisingly wild, not too much like a city park. Not yet... We walk on Chemin du Calvaire, admire the fresh green of the ivy leaves and follow the surprised salamanders' escape from the warm rocks at the edge of the footpath. A young couple carries bags full of groceries and walks briskly past us. 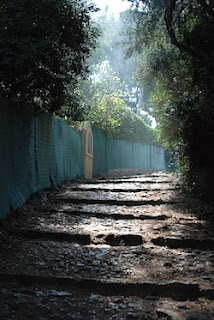 Suddenly I smell some smoke in the air. There is an open fire behind the fence in someone's garden, but luckily there's nothing cooking, it would be too much to bear! I wonder about the altar-like constructions that appear along the path. Each has a different message, marking the Christ's footsteps. We are, after all, on Notre Dame hill, and this footpath leads to the chapel. There have been pilgrims on this path already in 16th century. 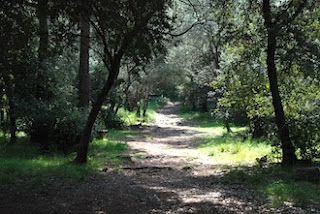 We finally give in to the call of the forest and turn right to the soft, wide path underneath beautiful, tall trees. There are dark squirrels racing up in the trees as well as on the ground, and a magpie walks slowly across the path. This place makes you forget about the busy city traffic down below. 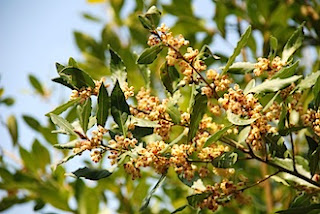 I stop to look at a tree in bloom; the leaves look very familiar. Is it a laurel? Perhaps. Over here, I should be carrying a tree guidebook to recognize them all; Finnish nature has different flora. I can't help wondering how this little forest in Garoupe has managed to remain as it is although the area is otherwise so densely built. 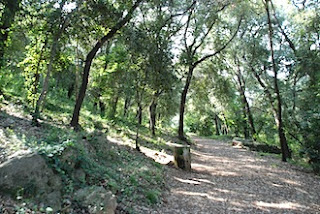 It is a pleasure to stroll here slowly, beneath the green trees. A shallow, weird looking concrete block looks out of place on the ground but with a closer look at the remains you can see it was once a squat toilet. A narrow side path leads us to a wall but there's a hole that lets us back onto the road - we're very close to the top of the hill. Only few more steps to go. 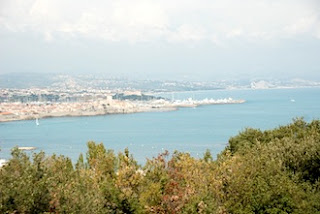 The easy climb was definitely worth it - the view from the top of Notre-Dame is fantastic. The coastline to the east includes Antibes and in the distance looms also Nice. The clouds unfortunately block the view somewhat and it's not possible to distuinguish for example Mont Bégo (up in Mercantour National Park) in the distance. The worn out but good mosaique map would be a great help in mountain spotting on a clear day. 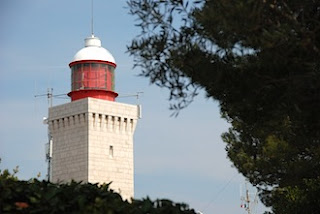 Behind the chapel of Notre-Dame there is a red and white lighthouse of Garoupe, keeping on eye on the coast and warning the seafarers. I rub my fingers on the lavender bush next to the chapel before we take off and start to descend towards the path round Cap d'Antibes. We also get a glimpse of the coastline to the west towards Cannes; the Mediterranian sparkles in the sun. 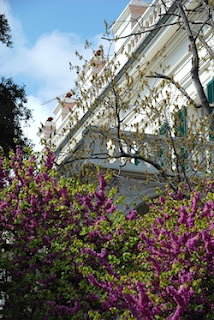 For now we have to do with walking on the side of the narrow road; sometimes there is a pavement and sometimes there isn't. So glad it's not yet a busy summer month with heavier traffic. The houses by the side of the road are mostly hidden behind heavy fences and gates, and some roads are marked private. In places you can however get a glimpse of how the wealthy live (or at least of their rooftops)... 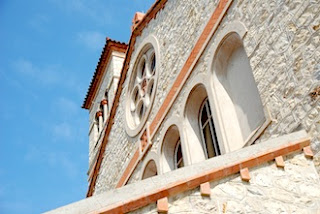 The road is already heading downhill, towards the sea. Wish I could sample some of the oranges or lemons that are growing by the side of the road... We reach a church which acts as a landmark: we'll take the second turn to the right. 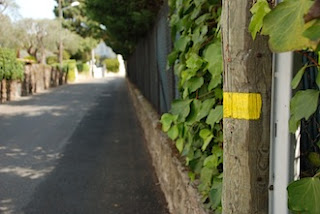 Once we've taken the second turn to the right, a familiar yellow trailmark greets us. The yellow colour tells that we are on the path called Sentier Touristique du Tirepoil which will take us round Cap d'Antibes. This first stretch doesn't of course look like much but we'll get to the actual footpath once we've reached Garoupe beach. 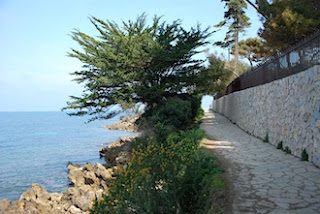 The path is clearly marked at the end of the parking lot on the right side of Garoupe beach. The Mediterranian Sea will remain on your left for the rest of the path - not bad, eh? On the right a stone wall will guard the happy houseowners' privacy for the whole way. At the start of the 2.7 km trail there is a warning sign that reminds you of some more difficult bits and about the fact that the path may be dangerous when the sea is rough. This is no joke. 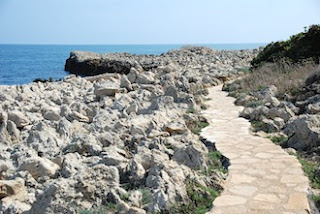 However, in this weather the trail feels like heaven when we pass Pointe du Cap Gros. The path underneath is fairly even for part of the way but in some parts you really have to watch your step, especially when the ground gets rocky or when descending or ascending steep steps. 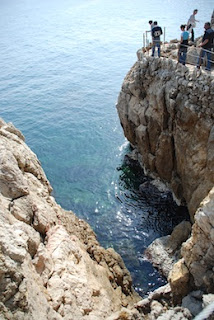 The glittering sea remains very close for most of the way. Here and there, there are steps that lead right to the sea - especially in front of villas that hide behind the massive stone wall. You can also stop to listen to the sounds the waves make when they hit the rocks. 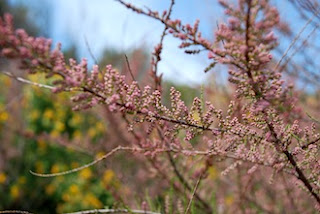 The path itself is fairly fair and colourless but it doesn't mean that the environment lacks colour. As early as in April you can already enjoy some flowers or bushes in bloom. For example, there are quite a few yellow flowered bushes next to the path and also pretty tamarisks the tiny flowers of which remind me of heather. And there is a bouquet of flowers, and a plaque... for 15-year old Sabrina who died here, hit by a wave across the path, in 1997. Beware of the sea. 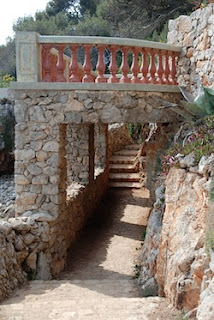 Here and there the path dives through trees or bushes, and once we walk underneath a pretty half-moon shaped terrace. There are quite a few people taking a walk, in both directions, but the path is not extremely crowded - you still get to enjoy some peace and quiet. 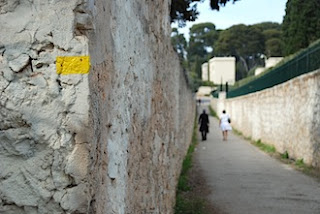 The path reaches a tall wall on top of which you can once again enjoy the scenery. After that, the path continues a bit further to the Bay of Millionnaires (doubt you'd be able to spot them though) but we decide to call it a day and take a sharp turn right to Chemin des Douaniers, following the yellow routemarks, to finish this sentier. Behind the wall on the left there is an eco-park where 54 olive trees were planted at the turn of the millennium, one for each child born in Antibes - Juan-les-Pins area during the first month of the year 2000. 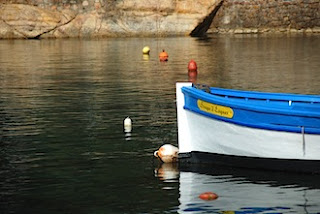 Once we've come a full circle to the start of the circular tour of Cap d'Antibes, we continue our journey along the winding roads towards Juan-les-Pins. The road soon arrives back to the seaside.  Most of the old wooden fishing boats are still ashore, waiting for the fishing season to begin. 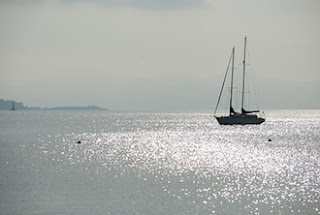 The Mediterranian see looks simply amazing in the late afternoon sun. There is a solitary sailing boar anchored in the bay, and behind it you can see the island of Marguerite. Somewhere in the distance there are also mountains, surprisingly close to the sea. 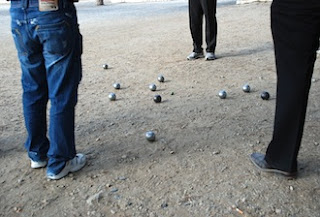 Juan-les-Pins seems to be all about newish apartment buildings and a busy port with yachts and sailing boats. However, the park before the Casino seems relaxed enough, with many groups of (mostly) men enjoying their games of pétanque. It would be great to play a game of boules but unfortunately we don't have a set of the required balls in our backpacks. Perhaps next time.
Sent by kenkä at 00:13

Email ThisBlogThis!Share to TwitterShare to FacebookShare to Pinterest
Tags: france

Walking blog. I walk to discover the world around me - whether a few steps away in my home town Jyväskylä, Central Finland, or elsewhere. Photos & texts © Kenkä.